A tropical low pressure system will slowly move across Sri Lanka and southern India this week, leading to flooding and widespread travel delays.
Widespread flooding is ongoing across Sri Lanka with some areas already reporting more than 250 mm (10 inches) of rain, including the capital of Colombo where rainfall has surpassed 350 mm (13.90 inches).
At least eight people were killed in flooding and mudslides, while tens of thousands have been forced out of their homes, according to The Japan Times.
As the low drifts into southern India over the next few days, heavy rain will fall in Tamil Nadu and Kerala with occasional downpours reaching southern Karnataka and Andhra Pradesh.
Due to the close proximity to land, AccuWeather meteorologists think that there is a minimal threat for this low to become a significant tropical cyclone. However, that will not diminish the flooding threat. 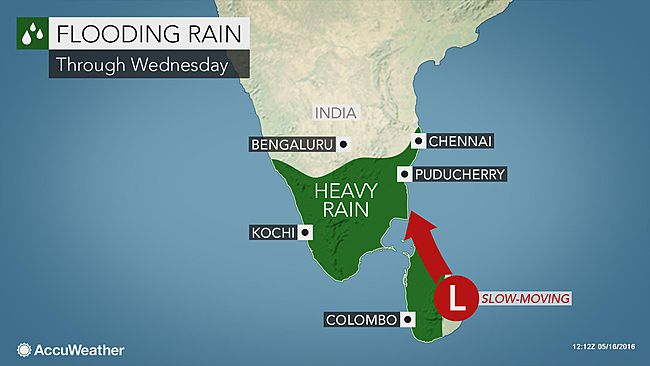 On Tuesday, heavy rain will also fall in northern Kerala and far southern Karnataka. Rounds of rain will continue to fall into the middle of the week.
Through Wednesday, widespread rainfall of 100-200 mm (4-8 inches) of rain is expected across the region.
The heaviest rain will fall in northern and western Sri Lanka as well as along the southwestern coast of India and in southern and eastern portions of Tamil Nadu. These areas could see locally 300 mm (12 inches) of rain.
RELATED:
India Weather Center
Sri Lanka Weather Center
Detailed Forecast for Chennai
Cities such as Jaffna and Colombo, Sri Lanka, as well as Nagapattinam, Madurai, Kochi and Chennai, India, will be some of the areas threatened by the heaviest rain and threat for flooding.
In Chennai, where the worst flooding in a century brought the city to a stand still in December, the heaviest rain will fall through the middle of the week before drier weather returns by the weekend. Flooding this week is not expected to be as severe, however travel delays will be possible.
The 2015 monsoon brought below average rainfall to Kerala, so this early-season rainfall is needed across the region. May is typically when southern India and Sri Lanka have an increase in rain from tropical lows and cyclones, which tend to develop during the leading edge of the monsoon.
As the low exits southern India into the Bay of Bengal during the second half of the week, the potential for tropical development will be higher. If a tropical cyclone were to develop, it would likely remain east of India in the Bay of Bengal with any impacts limited to the east coast of India.
Regardless of development, the heaviest rain will shift from southern India during the first half of the week into Myanmar and Bangladesh during the second half of the week.
Meteorologist Eric Leister contributed content to this story.